6 Days and over 700 miles of mostly unpaved forest roads from just north of Boise, Idaho to the Canadian border.

For a while now I have had the idea of driving most if not the entire length of the state of Idaho on unpaved forest service roads. In July of 2019 I achieved much of that goal by skipping southern Idaho and beginning from about 40 miles North of Boise near the town of Garden Valley and getting to only a few miles from the Canadian border in Kaniksu National Forest. The trip featured a wealth of beautiful scenery that I attempted to capture in photos and videos. I was lucky to avoid any breakdowns, major delays, unexpectedly closed roads or sustained bad weather.  Any of those could have ended the journey early. I have broken down the drive day by day in the links below. Each day was recorded using GaiaGPS.

To begin the trip I left Boise and topped off with fuel in Garden Valley. A few miles to the west I headed north on FR 555 headed to Deadwood Reservoir. This is where the GAIA GPS track begins that you see to the right. Right away this road climbs onto a ridge which provides great views and some really nice campsites, if it’s not too windy. You can see the sawtooth off to the East at a few points on this stretch. Deadwood reservoir is large and secluded but popular. It’s also possible to bring full size travel trailers in here from hwy 21. There are several campgrounds along the shore as well as single camp sites along the road.

From the reservoir I head north on Landmark- Stanley Road (FR 579). After going over Deadwood Summit at 6840ft the road drops into Tyndall meadows which is a beautiful spot with some great camping areas. From there I went through the communities of Landmark and Yellow Pine before setting up camp near the headwaters of Big Creek just over Profile Gap. View the full day 1 GAIA GPS route for more details and photos!

Day 2 began with a quick drive down to the Lick Creek Trailhead where I stopped to hike up to Lick Lake. View the  GAIA GPS track for the hike. This was a relatively short hike but it was also steep with about 2,000 ft. of elevation gain. It’s a small but pretty lake that’s tucked in among a couple peaks. According to others on the trail it is full of fish!

After the hike I continued driving on FR 340. It was slow going due to the winding and rough road. It took me up Goldman cut and Elk Summit both of which featured a lot of switchbacks. The day started at around 4000 ft, got up to 8600 and by the end of the day got back down to about 3000 ft. I stopped and camped at Shiefer National Forest Campground which is situated along side the South Fork of the Salmon River.

Arial View to the West from Elk Summit

My site at Shiefer Campground

On day 3 I continued on FR 340 over Warren Summit and into the town of Warren. Warren is sort of a living ghost town with several old abandoned buildings along side homes and businesses. There is also a Forest Ranger Station there and an airstrip. Warren is an interesting stop and should be an easy drive if you are coming from McCall.

Heading out of Warren to the West takes you up Steamboat Summit and down along the Secesh River and a lot of private residences. I turned back North on Forest Road 246 which took me past Burgdorf Hot Springs and then down into the Salmon River Valley on a long set of switchbacks. I ate lunch along the Salmon and then headed into Riggins for a resupply. I mostly needed fuel and licorice. Upon returning from Riggins I continued North on FR 221. This was a really well graded logging road with some great views but little to now spots to camp. So I continued on FR 309 up Hungry Ridge. I found a nice spot to camp at the north end of Hungry Ridge which wrapped up a pretty long day of driving.

Switchbacks down to the Salmon River.

Lunch location on the Salmon River.

Day 4 began with the drive down from hungry ridge and across the South Fork of the Clearwater River. After a few minutes on highway 14 it was right back up again on FR 648 towards McComas Meadows. Here there is a National Forest Campground oddly named “Camp 58” and a few private residences. From here the road continued up to China Point and the Elk City Wagon Road which was one of the roughest stretches of the trip. At no point on the entire trip was I concerned about getting stuck or not being able to get the Jeep and trailer over an obstacle.

McComas Meadows from above

Along the Elk City Wagon Road

Day 4 began with the drive down from hungry ridge and across the South Fork of the Clearwater River. After a few minutes on highway 14 it was right back up again on FR 648 towards McComas Meadows. Here there is a National Forest Campground oddly named “Camp 58” and a few private residences. From here the road continued up to China Point and the Elk City Wagon Road which was one of the roughest stretches of the trip. At no point on the entire trip was I concerned about getting stuck or not being able to get the Jeep and trailer over an obstacle.

The Selway River from FR 470 South of Lowell.

One of the many signs along the Lolo Motorway.

Spectacular View from the Lolo Motorway.

Toboggan Ridge (FR 581) looks great on a map but in reality it is very overgrown with low visibility. There are some great viewpoints along the way though. I would not recommend taking any type of trailer or even a full width vehicle on this road. There are some stretches where it would have been extremely difficult to find room to pass by an on coming vehicle. Luckily I didn’t encounter anyone else while on this road. After passing the Cayuse airfoils the road opens up and drops down to Kelly Creek. There is some great camping here along FR 255 which I took North. That brought me to FR 250 and the North Fork of the Clearwater River. FR 250 is paved for stretches and heads into Montana where I turned back West on FR 320. This route took me past Missoula Lake and then down to the St. Joe Wild and Scenic River. This river is pretty spectacular. FR 218 and then highway 50 follow right along side it. There are a ton of good camping spots along the way, many which can handle a travel trailer. At the town of Avery I turned north on FR 456 towards Wallace. This was an interesting road due to the 4-5 tunnels along the way. These look to be old railway tunnels. They are not lit and are only wide enough for a single vehicle so you need to have your lights on and be cautious heading through them. I stopped for dinner in Wallace and then kept driving up FR 456 to FR 412 where I finally stopped to camp as it was getting dark. The Belin Flats National Forest Campground was close so it was tough to find a campsite along the road on a Friday night!

The overgrowth along Toboggan Ridge Road

Toboggan Ridge view to the South.

Sunset on FR 208. Looking for a campsite North of Wallace.

After going 200+ miles on day 5 that meant day 6 would get me to the end of this route. The day started winding along in Coeur D’ Alene National Forest on roads 412, 306 and 744. This brought me down into the very pretty town of Clark Fork which lies on the east side of Lake Pend Oreil. From here I headed North on the highway to Bonners Ferry. After a few miles going East on US Highway 2 I jump back off pavement to FR 435. This took me over Canuck Pass at 5800 ft and to within a few miles of the Canadian border. Maps show a few roads going right up to the border but they were al gated for security reasons I imagine. The forest up here was lush and seemed very healthy. No evidence of pine beetle infestations that are found all over central and southern Idaho. I camped along Keno Creek south of Canuck Pass which wrapped up the Idaho Off Pavement (mostly) overland route!

The Final Campsite of the Trip.

During this journey I used the GAIA GPS App and my Idaho Benchmark Atlas extensively! Click the links below to get your own and support this site! 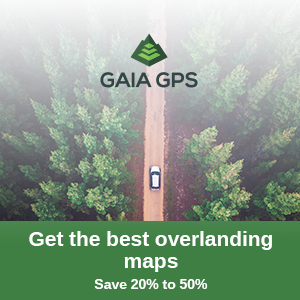